We all have milestones and record-breaking running stories to tell – some make us cry and some make us laugh to our heart’s content. Well, in my case, I always have this memorable running story that I always share with my friends that never fails to make me shake in disbelief, and be sentimental as I recount every moment on the road run.

Last June 21, 2015, I ran my second 21KM and I was in high spirits at that time. Hardly trained for the run but I was off to a good start in the first few kilometers. Then I slowly felt a little pain on my ankle when I reached Cabancalan so I ran a slow pace until I was simply walking. I wanted to go home but the Beatles in my ear drowned all my anxieties singing as if cheering me on. In my head, I was repeating myself, “I can do this! I’ll finish this run at any cost.”

When I reached Capitol heading towards M. Velez, there were already patrolmen by my side and I knew right there and then that I was the last runner so I asked a patrolman, “Sir, ako nay last noh?” He smiled and egged me on, “Oo, Miss. Padayon, kaya na nimo.” 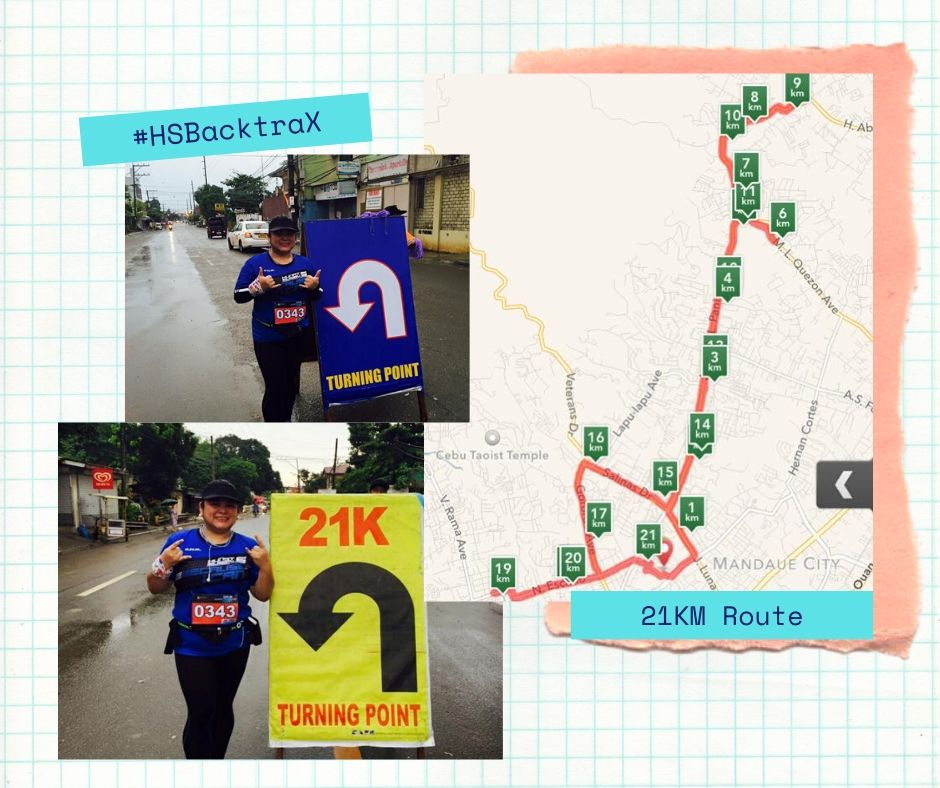 I felt so embarrassed because it was the first time that I was the last to finish. I was on the verge of giving up that I stopped at a gas station in Capitol for a bathroom break. When I got out of the restroom, they were still waiting for me. The patrolmen were all motivating me to finish the run and they kept telling me I am closer to to the finish line. I know they were only coaxing and building up my confidence because looking at the distance, I still have a long way to go. I pulled myself up silencing my fears and kept running and walking throughout the route.

When I was making my last few steps to the finish line with the patrol vehicles behind me who guided me from Capitol to Ayala escorting the last runner to finish the 21K race. I thought this scene would only happen in the movies with an inspiring soundtrack playing in the background while the onlookers & bystanders cheering for the last girl running — moving people to tears. LOL

Back to reality, as I reached the finish line, the staff of Cebu Parklane International Hotel was cheering me on and as soon as I stepped on the finish line, CPIH’s General Manager, Ms. Cenelyn Manguilomotan handed me a bottle of wine with a huge smile on her smile. I was shaking a bit from exhaustion that I couldn’t remember the time they gave me the finisher’s medal.

I met up with my friends who finished the run hours before me. I waved the medal at them with a triumphant feeling as if I won the first prize hahaha! That was one kick-ass run in my whole running stint. Just like in the movies hahaha

Looking back, it was the worst running performance I’ve ever had but the mere thought I finished the race was the most memorable and the sweetest challenge I’ve ever endured. I realized that it’s not a shame to finish last in the race but it is when you give up the fight.

My Hunat Sugbu 5 experience was instrumental for I found my purpose in running – it is not for a personal record to beat or a mere clamor for medals at the end of the race but a motivation for me to face any obstacles headstrong BECAUSE I CAN finish the race at any cost. And that’s what running is all about.